A Bit of a Stretch: The Diaries of a Prisoner by Chris Atkins | Book Review 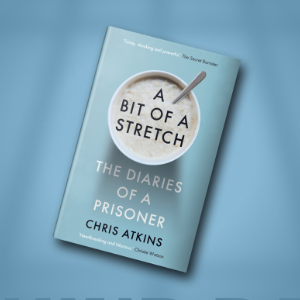 I really enjoyed this one. Stylistically it's similar to Adam Kay's This is Going to Hurt, in that it's a diary format, with a light tone and sense of humour though also covering heavier themes, giving insight into a life experience many of us will know very little about.

One thing that's quickly apparent is that Chris's experience is not the norm. While he is genuinely in prison, his privilege of being white, educated and socially well supported hugely influences his experience - he recognises this himself. His mental health stays intact and his ability to be trusted to complete jobs gets him out of his cell, keeping him stimulated and also allowing better phone conversations with his family.

However it is this privilege (including his previous status as documentary maker) that has helped this book be published. This does not just benefit Chris. He is giving us a genuine insight into the flaws of the prison and justice system which we would not otherwise have access to. Government ministers can cite hopeful initiatives as success stories but these visions are far from the day-to-day reality, with many prisoners often in their cells for 23 hours a day.

What was hardest to read, and feels most important, is the impact on mental health with many prisoners leaving in a worse state than when they first arrived. This in itself would be worrying but it's also counter-productive, affecting reoffending rates. I was struck when reading this how many people are in prison who perhaps would be better placed in a mental health facility. And if not, then they should have access to appropriate mental health support as this feels so limited, and it seems is often replaced by prisoners acting as "Listeners", trained by the Samaritans.

Better mental health support but also more prison staff (allowing more time out of cells and access to classes) feels vital for ensuring the mental health and safety of those serving time. Self-harm and suicide are sadly far too frequent amongst prison populations and yet are not taken seriously enough. One of the most painful moments of the book was hearing about a non-English speaking prisoner who was assessed without an interpreter present, who then went on to die by suicide. The cruel and often inhumane practises occurring in prisons urgently need reviewing and reforming.

This book could sound heavy and though it does talk about challenging subjects (TW suicide and self-harm), it is mostly a light read. Chris's sense of humour helps him through his experience and makes this an enjoyable book to read. I also enjoyed reading about the friendships made and kindnesses present between prisoners.

When thinking about changes that need to be made in our country, prisons aren't likely to be something many people think of. This book changes that - I was shocked by what I read: Chris's book shows just how dangerous it is for the system to be operating in the way it is, and the human impact of cuts to the service. We need to care about what is happening in prisons.