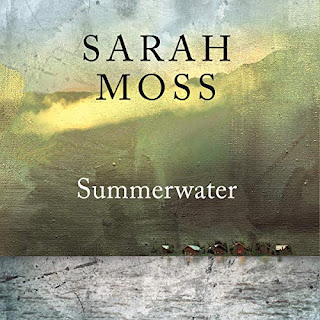 
In Summerwater we get snapshots of the lives of twelve holidaymakers, staying in a remote Scottish Highlands chalet park, over the course of 24 hours on one of the longest days of summer. This should have been idyllic, a holiday to remember, but instead the rain is relentless and families are forced to either face the elements or stay cooped up in claustrophobic accommodation.

Each chapter focuses on an individual in a semi stream-of-conscious style, and this is what I love most about Sarah Moss's writing. The sense of interiority is rich, with hidden desires and darker feelings sat alongside humorous moments of flitting back and forth between wants and what is more socially, or environmentally, acceptable. A mum left with an unexpected hour to herself finds time passing by too quickly, hard to settle on what she really wants to do. Her thoughts turn to her body and that coarse nipple hair she wants to remove, before talking herself down - that this isn't the way her husband would have anticipated her spending a rare solo hour. A woman, during sex with her fiancee who is determined for them to climax simultaneously, finds herself fantasising about Don Draper (with a back-and-forth conscience checking regarding Mad Men scenes) but also, bacon rolls.

Scenes such as these provide lightness in their humour, as well as the relatable sense of being cooped up and the tension that can bring. Outdoor scenes, however, feel dynamic and urgent. We begin with a mother's early-morning run, and later a teenager's need to get out sees him struggling against nature in his kayak.

What ties the various scenes together seems to be the characters' craving for, or at least an engagement with, solitude and escape. Seeing different members of the same family or relationship gives another perspective too - how people fit together, and how they don't - the sense of disconnection in never fully understanding the other. There's also the sense of movement, of the body in motion, and often in relation to another force - walking or running through the wind and the rain, sex, kayaking in treacherous waters. Then with that, an underlying foreboding sense of risk. Whether from the sheer power of nature, the fallibility of the human body, or - the risk of the other. Amidst the group of British holidaymakers there's a family from elsewhere, and they're making noise at night. Too much noise. We see someone claim to not be racist and yet how quickly their irritation turns to dehumanisation.

It's this sense of movement, and pent-up energy, that makes this a compelling read with an explosive finale that after so much downtime held more power.

Moss's language can be very descriptive, and I commented in another recent book review that I'm not a big lover of wordy nature descriptions. It feels different here, though. Purposeful. It almost feels like another character in itself, the sense of pushing back. Between people-focused chapters there are interludes where nature is the focus, and here too it's apparent how within nature, even while it may seem still, there is always movement and tension.

This didn't blow me away as much as The Tidal Zone, perhaps that had the power it did because of it being my first Sarah Moss - feeling in awe of her style of writing, taking it in for the first time. I also seem to love books more when they can really go into depth, whereas here as much as there is interiority our time is split between the characters. I also wished we could have had the perspective of the European family, though I can understand the difficulty of voicing this and also the literary benefit of them staying the unknown 'other'. It is clear it is the characters doing the judging and not the author, and yet I feel there could have been a further opportunity for empathy here.

Still, I loved the pace and tension of this - the split between sedentary passing of time and genuine risks that could so easily turn to disaster at any moment. And I will always love how Sarah Moss writes about people, what it is to be human (to be a child, a teenager, a mother, a father, to live with a declining body and a failing mind), how connected and yet how separate we are, and just how ridiculous we can so often be.


Thanks to Pan Macmillan and Netgalley for the ARC.

Release date - 20th August. Available for pre-order now (really helpful to authors and a future-treat to yourself!)