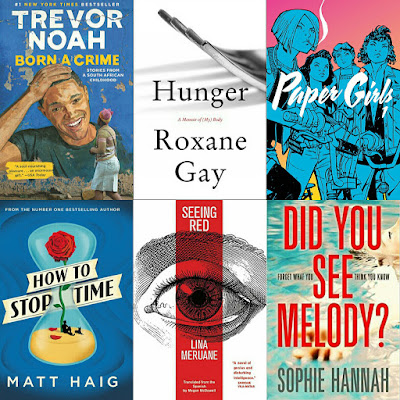 With getting back to studying I'm currently trying to suss out how I can keep sharing my reading when I don't have as much spare time. While I'd love to keep making videos, my temporary solution is that I've started a Facebook page for reading updates, though I'll keep sharing wrap-ups on here too.

Anyhow, here's what I finished reading in September!

BORN A CRIME - Trevor Noah (audio)
★★★★½
Trevor Noah is such a brilliant storyteller. You get a real sense of his childhood but also of South Africa during that time. While the book was lovely to listen to, with lots of funny anecdotes capturing adolescent awkwardness, it also taught me a huge amount about Apartheid and South Africa generally. Some really powerful moments too that had me gripped and in tears at one moment. Really glad I listened to this one.

HUNGER - Roxane Gay (audio)
★★★★
This is a memoir of Roxane's body and life - both of which changed forever when, aged 12, she was raped by her boyfriend and his friends. As you'd expect, it's a difficult listen, but I'm glad I've heard her story.

She writes about shame and making her body bigger and bigger in an attempt to feel safe, and then losing control of that control. This was an honest, vulnerable book that felt important for me to sit with, even if (or perhaps because) that felt uncomfortable at times.

I sometimes craved for the chapters to be longer as mostly they were only a couple of minutes' long, though I can also see why that might have been the best structure for the author to be able to share her story.

PAPER GIRLS Volume 1 - Brian K. Vaughan & Cliff Chiang
★★★
This graphic novel has been compared to Stranger Things and I can completely see why - kids out on their bikes getting involved in scary stuff with time and space weirding out. Set over the early hours of Halloween 1988, this was a lot of fun (if a little all over the place at times).

HOW TO STOP TIME - Matt Haig
★★★
I've loved Matt's other fiction (The Humans & A Boy Called Christmas) so expected to love this, especially with all the gushing reviews, but in the end I just liked it.

It's a sweeping story about Tom Hazard, a man who is hundreds of years old, and has to keep moving on in order to stay undiscovered. We meet him in his current life as a history teacher at a London comprehensive, but much of the novel flits around different times in history. And it was that flitting that, for me, made it difficult to really feel for the characters and their relationships. Still enjoyable though!

SEEING RED - Lina Meruane
(translated from the Spanish by Megan McDowell)
★★★★½
A searing, semi-autobiographical short novel that begins when a young woman very suddenly loses her sight. She's known it could happen, but then it does, and her vision is filled with red and it's shocking - to her but also to the reader. It's written with such urgency in a stream-of-consciousness style that captures feelings so well.

It was slightly less powerful than I expected but only in terms of pacing, and that's because it's more autobiographical than I first realised. The novel moves forward with her adjusting, and having to wait to see what will happen next. Despite being more real than I expected, it's also more strange - delving into dark feelings and impulses surrounding the situation.

I loved the writing style of this, and it's always good to read work exploring the body and dynamics around disability/illness.

DID YOU SEE MELODY? - Sophie Hannah
★★★½
I nearly got put off reading this when one reader described the first third as like a TripAdvisor review (!). I'm glad I read it anyway because this was lot of fun and exactly what I hoped it would be.

This slow-burner thriller centres around Cara Burrows, a woman who's run away from her family life in England to a luxury Arizona spa hotel, in an attempt to work through her problems. Instead she stumbles into an even bigger one when she accidentally discovers, or thinks she discovers, a teenage girl who was reported to be murdered by her parents years before.

I loved being so addicted to reading this, and even if it felt a little ridiculous towards the end - I didn't mind. I also liked how it almost felt like a true crime within a novel as Cara reads transcripts of interviews and watches videos about the Melody case. Reading that the book had been partly inspired by Serial & Making a Murderer made a lot of sense, and absolutely enhanced my enjoyment.