What's on at Edinburgh Fringe Festival 2017 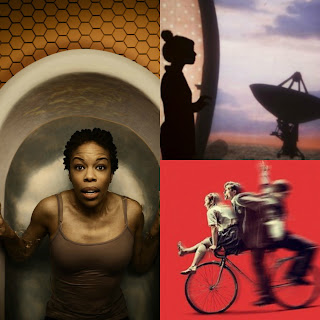 While going to the Edinburgh Fringe at the end of the month means I get jealous seeing everyone already up there, it also means I get the benefit of all the buzz and reviews - making my list of shows I'd like to see ever longer.

So I thought I'd share some of the shows I love the sound of. If you've seen any of these, or have any other recommendations, let me know!

First a couple of shows I know I can recommend as I've seen them before (meaning you may well have heard of them too)...

Theatre Ad Infinitum have won countless awards and critical acclaim for their stunning show Translunar Paradise - a story of love, loss and letting go, beautifully played out through mime and mask, and more moving than I could have imagined.

Uplifting but honest about depression and a one-of-a-kind theatrical experience, Every Brilliant Thing is back at the Roundabout for a limited run from 23-27 Aug.

The Big Bitesize Breakfast Show is a great way to start the day, kicking off at 10.30am with drinks and pastries included. It's always a strong mix of funny and thought-provoking mini plays. Then, at the end of the day the Loud Poets give a powerful, eclectic set of poetry that entertains and inspires.

And some of the shows I have high hopes for...

It's not often I get to watch shows that tap into my experience with chronic illness and The Shape of the Pain promises that, in a story of one woman's life with Complex Regional Pain Syndrome. It sounds like how this is explored and communicated is very cleverly done - The Guardian describe it as a 'kaleidoscopic exercise in empathy'.

Also at Summerhall & Roundabout (on the same site) are...
- Tense psychological thriller about betrayal Black Mountain
- One-woman play Pike St with award-winning Nilaja Sun capturing the chaos and characters in a young woman's life as disaster heads for New York
- Movingly truthful and darkly comic Box Clever - a new play about one woman’s experience of a refuge and trying to do the best for her daughter
- From the same producers as The Solid Life of Sugar Water a couple of years back (which was brilliant), is witty and touching new play Cosmic Scallies - set in Skelmersdale and exploring class and friendship

A couple of shows exploring mental health I'm interested in include The Room at the Top of the House, about the small places we hide when the world feels too much; Jack Rooke's Happy Hour - focusing on illness in relation to men and masculinity; three-hander play The Inconvenience of Wings exploring the impact of bipolar on a couple; and A Super Happy Story (About Feeling Super Sad) - turning to music to tackle the experience.

And a couple others I like the sound of...
- Lula Del Ray - we saw Ada & Ava by this company (Manual Cinema) last year, and honestly you can't imagine the magic they create with overhead projectors. Beautiful storytelling and impressive stagecraft
- Cathy - inspired by the Ken Loach film Cathy Come Home, this five-star show tackles modern day poverty
- Woke - this one-woman play with music tells the story of two women, 42 years apart, involved in the civil rights struggle. I'm hearing that Apphia Campbell is a powerful actress with a stunning voice
- The Nature of Forgetting - a physical and emotional look at early onset dementia. It sounds beautifully done, and is getting five star reviews
- Monster - Joe Sellman-Leava (performer and creator from the brilliant Labels) returns to explore masculinity and anger
- Bare Skin on Briny Waters - a story of survival and escape set on a clifftop and underscored by live folk music
- Goody - one man and his chimpanzee in dustbowl America. I'm intrigued..

From the same producers, critically acclaimed hit How to Win Against History is back, telling the story of another real life figure who defied society's gender constructs way back in the late 1800s. Again, looks like a lot of fun while also an important, intelligently thought out show with a strong score.

I don't usually give much thought to music acts at the Fringe, but when Choir of Man took over Assembly's Instagram I could tell they'd be a lot of fun to see. Beautiful voices in a show that looks like a riot.

I'd also be interested to see Aaron Calvert again - we saw him last year as part of the Free Fringe and were really impressed. Closest comparison I could make is the kind of stuff Derren Brown does - he's very clever and charming with it.

Nina Conti always cracks me up and her new show In Therapy couldn't sound more perfect (given my new career path). It's a limited run from 23-27 Aug, but she also has her hit show In Your Face from 17-24 Aug.

We saw Sofie Hagen the year she won the Best Newcomer Award - I loved her honest and hilarious set that ranged from mental illness to Westlife fan fiction, and she's back this year with a show that's selling out fast.

Then, some comedians that I loved the sound of and have enjoyed getting glimpses of on YouTube include: Lost Voice Guy, Hannah Gadsby, Lauren Pattison, Laura Davis, Jamie MacDonald, Kiri Pritchard-McLean, Harriet Kemsley, Loyiso Gola, Tape Face, and sketch comedy from Goodbear. And on as part of the Free Fringe: Ahir Shah, Rory O'Hanlon, Sunil Patel, Head Sets, and Nasty Women on the Fringe.

So I'm excited for hopefully seeing some of these, but also the shows I haven't heard of - that we discover while there, and that my family are excited to see too. And I'm also buzzing to just be there.

I'll report back once we've been, but in the meantime please do let me know your recs on here or on Twitter, and also any food suggestions too :)