What I read in May 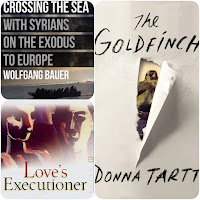 Amidst moving house and enjoying London life while I was still there, I read a lot less this month - but what I did read I loved.

Crossing the Sea: With Syrians on the Exodus to Europe - Wolfgang Bauer ★★★★
I realised recently that while I know when the media are giving prejudiced misinformation about refugees, I know very little about what is actually happening and why. So I was keen to pick up this book by Wolfgang Bauer, in which he goes undercover and joins a group making the journey from Syria to Europe, and I was glad I did.

I gained an understanding of what was happening, and was gripped by the stories of the people within the group. Bauer unflinchingly explains the horror and the necessity of these dangerous trips, taking you along the journey with them - the waiting, the fear and uncertainty of it all.

At just 144 pages, I feel though I learned a lot, and was shocked by what I did, I was still only getting a glimpse into the situation. I'd like to read more about what is happening back in Syria and the journeys involved. Still, it's a difficult read and so in a way the shorter length is helpful, making the read more of an accessible and plausible pick-up than a lengthy book.

The writing is strong and it's an important book which I really would recommend if you want to know more about what's happening with the refugee crisis - the worst since the second world war.

Love's Executioner and Other Tales of Psychotherapy - Irvin D. Yalom ★★★★★
I'm training to be a counsellor soon and and have always been interested in books exploring psychology, so I knew these stories of clients in therapy would be of interest. What I didn't expect though was the quality of the writing, with the "characters" and their situations brought to light so compellingly.

There's a quote from the New York Times on the front cover which says "Dr Yalom demonstrates that in the right hands, the stuff of therapy has the interest of the richest and most inventive fiction" and I think that's absolutely right. For that reason I'd recommend this even if you have no interest in therapy.

As well as being a genuinely enjoyable read, what I found fascinating was the intimate invitation into this usually private situation. You get to bear witness to what the client would only share in this safest of spaces, but also to Yalom's thoughts about the client and the process itself - acknowledging his own weaknesses and regrets through his career.

I already want to read this again, not just because I want to soak up everything you can learn from this really masterly therapist, but because there's incredible depth in the stories and explanations. It's not a difficult read, but one you can get so much from.

The Goldfinch - Donna Tartt ★★★★★
Oh man this book! I knew its reputation was strong but I had an assumption that I would be more impressed than entertained but it was absolutely both. This is probably the longest novel I've read (773 pages) but I still didn't want it to end. Telling the story of a young boy who survives an awful, traumatic situation, we see how he moves on through his life, still carrying the weight of what happened with him.

The writing reminded me of John Irving. I've only read one of his books, The World According to Garp, but the ability to capture the intimate, believable details of the day-to-day as well as the wider scope of a life over time, is what I loved about this too.


I've also been reading The Versions of Us by Laura Barnett which I'm enjoying - more on that in the next round-up.

Let me know if you've read any of these and what you thought, or any other recommendations! And you can follow me on GoodReads & Twitter.