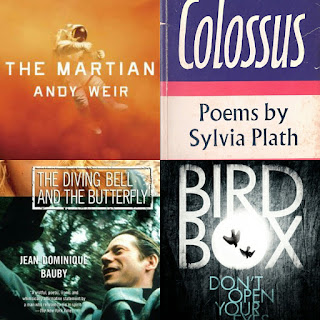 Some of the lovely ladies over on BookTube (YouTube - about books: my new obsession) are hosting a readathon that I wanted to share a post on as I loved the idea of it.

From 10th-17th April they're encouraging you to read from different genres to your usual choices - reading at least three books from different genres. They'll be talking throughout the week on social media via #genrethon, and there'll be a live streamed chat on Sunday 17th April 8pm (UK time). So yeah, it'll be a lot of fun! And no pressure involved.

Personally, I tend to read mostly literary fiction and non-fiction memoirs. This is a good chance to try something new and see how I get on.

I struggle with the concept of a TBR (to be read list) because I always want to go with how I feel at the time. So I thought I'd treat this as a wishlist to choose from across the week.

Play
I love theatre and see so much of it, yet I rarely read plays since I left uni. So I'll choose at least one from these three that have been sat on my shelf for far too long.

Poetry: The Colossus & Other Poems by Sylvia Plath
I've been watching performance poetry online and live for a while but only recently got into reading it (I loved Andrew McMillan's Physical last month). I've heard great things about this collection.

Sci-fi: The Martian by Andy Weir
I never read sci-fi and so this seems like a good, accessible starting point. If you haven't heard about the plot via the film or much-discussed novel - it's essentially about a man stranded on Mars. Good starting point I think!

Horror: Bird Box by Josh Malerman
Again, I love horror films but never read them. Last one was probably from the Goosebumps series I reckon. Good times. I've heard a lot of buzz about this so have high hopes.

Memoir: The Diving Bell and the Butterfly by Jean-Dominique Bauby
Now I know I read a lot of memoirs but I really want to get to this ASAP. Former editor-in-chief of French Elle Magazine Jean-Dominique suffered a severe stroke aged 43, leaving him almost completely paralysed and suffering from locked-in syndrome. The book was dictated by him blinking his left eye to select letters to a transcriber, and the memoir explores his new life and perspective.

Graphic Novel: tbc
The last graphic novel I read was Daniel Clowe's Ghost World when I was about 16 and obsessed with the film. My plan is to go the library and see what they have - so any recommendations please let me know!

Fiction/YA: Our Endless Numbered Days by Claire Fuller
Because I started this the other day and may still be reading when Sunday rolls around. Which apparently counts towards Genrethon. Sneaky sneaky.

Let me know if you'll be taking part and what you'll be reading!

There's also a giveaway involved in the readathon, with details in Brittany's announcement video here: