These kind of posts are everywhere, and quite potentially really self-indulgent, but for me they're worthwhile to write - to take a moment to reflect, and to have something to look back on in the future: a record of a year.

A year of bravery

I took some little and big steps in 2015. One of those was that I started going to the gym. I was nervous, more socially than physically, but again - the fear was out of proportion and I quickly got used to the situation, and even enjoyed it. With limited time, money and inclination - it's not something I've carried on with, but it was helpful in preparing me for - going to Asia!

The day after my 25th birthday I flew to Bangkok by myself, ready to begin an adventure with 30 strangers. I did a two-week Contiki tour through Thailand, Laos and Cambodia, and I bloody loved it.


Then when I got back I started driving lessons. I only did 10 hours before having to move, but it was scary and I did it, and I should really get back to it.

Oh and me and a friend climbed the o2! It was so much fun and a great thing to do together - I'm sure we'll always remember that day. I also loved it for knowing it was something I absolutely wouldn't have done a few years ago - fear would have got the better of me. 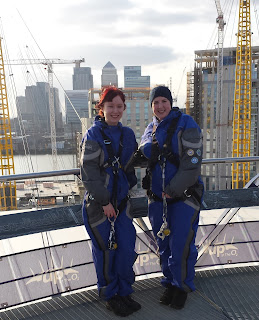 A year of big changes

In July I handed in my notice at work and, after being given a lovely send off, I moved to London - to begin a new job. It felt scary and refreshing in equal measure, and was absolutely what I needed.


I'm loving being in London and the opportunities that provides me - like meeting new people, performing in You Me Bum Bum Train, going to workshops, and seeing so much theatre.

It's silly, but the view from Waterloo Bridge still takes my breath away. I just love it. 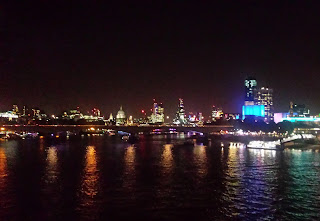 A year of (mostly) healthiness

So for most of the year I was healthy. I barely felt like I had POTS at all. Then in October I relapsed and have been feeling pretty rough ever since. But it's important to focus on how for three quarters of the year I was basically symptom free. And that most of the exciting things that have happened this year would not be possible if not for the medication I started on in 2014, via the incredible team at Kings College Hospital London.

I've been getting into eating healthier too. Not in a big determined health kick kind of way, but gradually making changes - prompted by the discovery of Deliciously Ella. Seeing her recipes and realising how few ingredients were necessary and how little time they took was a bit of a hallelujah moment. The first ones I tried, and probably my favourites still, are the Cannelini Bean Stew and the Roasted Aubergine & Tahini Bowl.

A year of creativity

For the past five years (five?! where has the time gone) I've been blogging on here - writing articles about personal experiences, and reviewing theatre now and then. This year, I started getting a bit more playful with form. I wrote some "kind of poems" which I recorded and shared.

In September I took on Cassy Fry's 30 day challenge, responding creatively to prompts, which I really enjoyed. The structure of it was surprisingly freeing and I loved not knowing what, or how, I was going to write.

In November I went to a poetry workshop/masterclass via Outspoken London hosted by the brilliant Andrew McMillan, which was really inspiring.

I want to try and write more poetry and creative writing in general, and to be brave enough to share - which is both exciting and nerve-wracking. So please bear with me as I try things out on here, and let me know any thoughts.

I took more photos than I usually do through getting into Instagram. Turns out there's a lot more to take photos of in London!

On another note - I saw a lot of theatre - and some really great stuff. Here's my top ten.

A year of minimalism

Moving house twice meant it was time for a clear out. I gave around half my clothes to charity as well as almost all my DVDs, and random stuff. Turns out it's so much easier to keep a room tidy when it isn't crammed full of stuff you don't need or even care for.

I think my work in 2014 collecting make-up for women's refuges made me more aware of how much I have. I no longer mindlessly buy beauty products or clothes I don't need, or even want that much.

A year of loss


In August I lost someone really special, and that still feels immensely surreal and sad. Without wanting to tell anyone what to do, or speak in cliches, please - if you love people - spend time with them, value that time, say thank you, and that you love them - if you can. There are people we think will always be there, and yet they won't. There's no certainties, and cancer is cruel: it takes people too soon. I can only be glad to have no regrets, and to feel some reassurance from what my mum said in her eulogy: to know that the pain of losing someone is the price we pay for the privilege of knowing them.

I had a lot of fun this year. Being at Dreamland's Opening Night Hullabaloo and seeing Marina and the Diamonds perform was really special, I did trips to London Zoo and Chessington Zoo, I swam in the sea in Whitstable at night, and I explored London and fell a bit in love with Greenwich on one perfect Sunday.

And then I partied (in a very tame but wonderful way) with my family on New Year's Eve after a lovely Christmas. 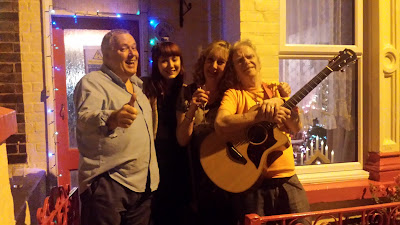 Looking forward, I don't want to set resolutions or put myself under any pressure. I just want to have more good times with good people. I want to be brave and be kind. I want to read and write more.

I hope 2015 has treated you well, and I hope 2016 is even better. Go do all the things you've been meaning to do, but do them because they make you happy.