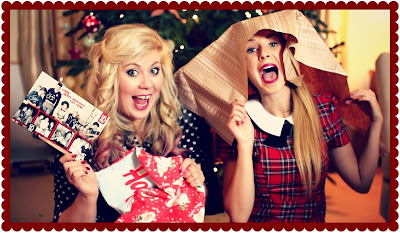 So today's the 2nd December. The countdown to Christmas has begun but so has something else. Something I'm a little embarrassed to admit to being excited about.

If you've no idea what I'm talking about, fair enough! Vlogmas is when, over the countdown to Christmas, many YouTubers put out daily vlogs where we follow them over their days and festive fun.

And why I'm a little embarrassed about this is because I'm 25 - probably around the same age as many vloggers but about ten years older than their core audience.

Anyway I know we probs don't need another think piece about the world of YouTube, but I wanted to throw my perspective in - what I get from these videos now, and why I wish they'd been around when I was a teenager.

Why I enjoy them now

Even now I find make-up shopping a bit overwhelming - there's so much choice. How do you know which lipsticks stay put and which skincare works unless you try it? Trial and error takes too much money, so it's nice to have recommendations and advice from people who know what they're talking about.

I used to watch a lot of the beauty videos, but now less so as I'm pretty minimal with what I buy - if I really want something I'll get it, but no more mindlessly adding to bright lipsticks that I never wear anyway.

What I really like now are chatty videos, from the likes of Giovanna Fletcher, Carrie Hope Fletcher and Rosianna Halse Rojas, and the weekly vlogs from The Michalak family - which are beautifully edited and a lovely relaxing watch. I also love Louise/Sprinkle of Glitter's vlogs for a genuine glimpse into family life - and she's really funny.

The vlogmas thing I like because it means there's always something to watch, and it's just so festive. I especially enjoy and appreciate this when, like now, my chronic illness is bad and I have a lot of time at home, and not a lot of energy. (also just fyi: Zoella is putting out a video on both her main and vlog channel everyday, for 24 days. Blimey.)

Why I needed them then

As a teenager I had a silly mixture of simultaneously thinking all pursuits of beauty were vain, while also being really insecure about the state of my skin and general appearance.

In reality, maybe I wouldn't have been onboard with the YouTubers I watch now. I was too busy trying to be cynical and serious (while secretly being obsessed with Kristin Chenoweth videos on YouTube and Dancing On Ice on telly). And, like I said, the beauty world didn't interest me at all.

But then, maybe it would have - if I'd understood it. I never would have been straightening my hair or reapplying make-up at school, but if I could have known a bit more maybe I would have felt a little more confident. I'm sure I still would have struggled, because that's being a teenage girl, but it might have helped.

Equally, confidence is something a lot of YouTubers talk about. I really respect Zoe Sugg for often going without make-up in daily vlogs even when her skin is flaring up. She talks about this and reassures her viewers not to worry about their own skin.

Why they're a good thing

Pure entertainment! Because what's so wrong with that? And yes, they are entertaining. Just because people like to talk about beauty, that doesn't mean they're not also funny or intelligent. That's ridiculous.

But also - issues! YouTubers talk about real life difficulties in a way which is relatable. Zoella and anxiety, MegSays and chronic illness, Hannah Maggs and motherhood, etc etc.

It may be someone watching has struggled with the same thing and is too scared to talk about it, then there's someone speaking directly to camera, to them. They feel relieved. Maybe they talk to someone. That's a GOOD thing.

Then there's the book deals, which so many are skeptical of. BUT Zoella's Girl Online may be getting so many reading who don't usually. Then they read other books. And that's great.

What makes me a bit uncomfortable

With many videos focusing on "hauls" and extensive monthly favourites - I worry about the pressures on buying. If teen girls end up spending the little money they have on beauty products, and potentially saving for high-end so they can share favourites with their heroes - that's fine if they love it, but not if they're doing so because of pressure. What's more worrying also will be the girls who can't afford any products at all and may then feel bad about it.

Then the other thing for me was sometimes I used to find myself mindlessly watching these videos, whereas if I would have found a good film/documentary/TED talk or, you know, read a book - I would find more enjoyment and satisfaction. Like anything, it's about balance and moderation, and doing things mindfully. Sometimes all I want to do is be curled up and watch daily vlogs. More often I'll want to be lost in a book. Both are ok.

And there's also the issue of teenagers now dreaming of vlogging as a career, predominantly because of the gifting and the celebrity lifestyle - without necessarily realising the hard work that goes in, or how hard it is to actually earn money from. Still, if people are encouraged to make their own videos - that's a skill. And we don't criticise kids that want to be popstars with no real intention of doing so. Let people have their dreams, just maybe let's try to show the reality too.

Let people be happy, and do their thing! Both vloggers and watchers.

Not everyone will enjoy watching these videos but they're not for everyone - that's ok. You might think it's vacuous but there's millions of others who don't (or who do and enjoy it anyway). You don't have to watch them so why waste energy criticising.

Also don't pin the whole world on them. They don't have a responsibility to be a feminist hero or talk about the issues you want them to.

But I feel like they are good role models. In an era of female popstars being marketed to young girls while wearing next to nothing with sexually provocative lyrics, I'd feel so relieved if I had a little girl looking up to Zoella.

I think a lot of the criticism that occurs is due to a presumption around lack of creativity, skill and hard work. I'd challenge anyone making that critique to put out the content these vloggers do, under their time pressures, or just at all. Yes some of them earn a lot of money, but they're also very good at what they do. If you don't like that then critique the system, not the creators.

And finally, some recommendations

For vlogs: The Michalaks (family life with just the cutest toddler), Sprinkle of Glitter & many of the above too