September 01, 2015
Following on from my previous blogpost, here's what we saw at Edinburgh Fringe Festival on my second (and last) day.

[fyi: going at the end of the Fringe means you can make some very good choices about what to see based on recommendations. This has been my shortest trip yet, but such quality theatre fitted into that short time frame. Just a heads up if thinking when to go, but also - I don't think everything is fantastic. Some of this stuff really, really was.]


At first dubious about the pop culture title I was quickly convinced that this would be more than that. I anticipated a meditation on relationships and love, with some cheeky Friends references thrown in, and that it'd be a bit dark but also funny, but I didn't know more than that. And I got a lot more than I was expecting.

It begins fast-paced, hard to keep up, with the frenetic energy of romantic pride, of claustrophobia, of introductions and of uncertainties, of fantasies of something different - maybe something better.

Then there's something unexpected. A diagnosis. Test results. "Anywhere up to a year".

And suddenly the insistence on independence ("when did the 'and' appear after my name?") feels futile. The idea of one without the other is impossible.

We go through the whole ordeal with them, the doubts and nausea and imaginings of a future without, and it was honest and raw and it just about broke my heart.

Molly Vevers' performance and James Fritz' writing together are just astounding. This will surely transfer to London and tour, and when it does you should see it.

This is the story of a girl in Cardiff. She's drunk most days and scaring mums in the street who try to cross her. She's judged and she knows it.

Everything changes when she meets a wounded soldier. After one night together she no longer feels alone, even when things aren't quite what they seem.

Performing as Effy is Sophie Melville, and she is one of the most phenomenal performers I've seen. Beginning with this aggression and then melting into a sense of warmth, childlike and strong and ready to care, and then into a place much darker. The writing is funny as well as moving, and it all just feels really genuine.

While the performance was naturalistic, her physicality was something else - at times moving to the rhythm of the words and changing in a way that was subtle but intense.

This was one of very few standing ovations I've ever experienced at the Fringe and so, so deserved.

Again, if this tours - SEE IT.

I feel like there's a lot of theatre around about dementia at the moment. It makes sense: we have a growing, ageing population and it's something people are having to encounter more and more. Reading about this piece following a recommendation seemed a little different though. I'll be honest: it was the robot that drew me in.

Preparing for his passing, a man makes his wife a robot, uploading all of his "data" so she could have someone to talk to, about their wedding, or to play games of "I Spy." Encounters with this really rather remarkable robot play alongside flashbacks to the couple's youth and the beginnings of their relationship.

While the writing didn't always feel novel (I feel like I've seen the older couple mirrored by younger couple device many times now?) the story played out nicely with believable performances.

[My parents absolutely loved this and thought it was really very special.] 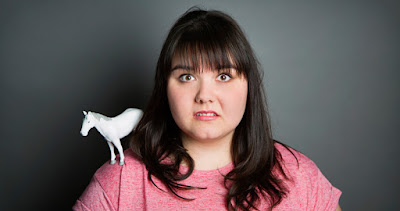 I don't really know how to write about comedy except to say that Sofie Hagen is hilarious and ridiculous, partly because of her actual Westlife fan fiction, but also because HOW IS THIS HER DEBUT FULL SHOW? She is so natural and assured you'd think she had been performing forever.

Sofie has just won the Best Newcomer Award and this really is so deserved. The writing is skillful, she's charming and the show is just very, very funny.

Also huge points for addressing mental health, self harm and body image in a way which isn't scary, it's just a part of who you are and it needs addressing and just bloody YES.

And I so hope that the members of Westlife will get to see this show. I would pay good money to see their reactions..