August 31, 2015
With so much going on I wasn't sure I was going to make it up to Edinburgh this year but I couldn't quite resist and decided on a flying visit for the final weekend.

So, even though the festival's over, I'm sure many of these shows will have a future life. I really was properly in awe of the talent this year. Here's what I saw on the first day.


Seeing Ernie was a result of a changed plan and a "nearby now" suggestion - and I'm so glad it worked out this way. James Craze performs this one-man show telling the true story of his grandad's life.

The show is full of charm, charisma and energy. Despite living and working through the Second World War, the tone is not bleak. There are moments of pathos but Ernie's sense of hope and enthusiasm always propels him forward to the next day and challenge.

Many wartime pieces seem to focus on romance and strife but here the story follows career, adventure and camaraderie - we meet Ernie's managers and mentors and follow his career and struggle to support his family.

This was such an enjoyable watch with a really impressive performance from James - cleverly switching between personas (over 32 of them) and using his physicality to have us truly imagine the moment. A lovely, innovative example of this being his medical exam - seeing his arm pulsate for blood pressure, and then chest for heartrate.

Ernie felt like a hidden gem, and a joyous light amidst the often heavy nature of the Fringe.

The Solid Life Of Sugar Water

The set for The Solid Life is striking: a vertical double bed with bedside table and open drawers. The couple are there as we come in, sleeping, upright.

The play begins with the couple talking us through them having sex. It's detailed and an odd mix of familiar and awkward, with humour sitting alongside references to something that's happened, that they're recovering from.

Through two tender, personable performances we find out how they began, of each date, of him being intrigued by her deafness, finding it a little exotic. They're just a normal couple and they're likeable.

Without giving too much away things do get heavy, and flitting between their pain and back to their sex, we feel almost too close to their situation - it's moving and uncomfortable. Jack Thorne's writing is fragmented and powerful and I enjoyed getting to both hear and read the script via the creative captioning. This added to the experience in a way I wouldn't have anticipated.

A Sudden Burst Of Blinding Light 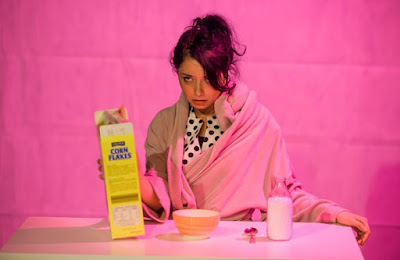 This playful piece explores mental health alongside looking at romance and vulnerabililty, with a bit of magic thrown in too. The vehicle for this story is a dreamlike game show with big smiles from our cheeky presenters. We hear of Jude's mad mother, and flit between the presenters' flamboyant interpretations (pictured) and the duller, more painful reality.

An unexpected highlight came from the smooth voiced, hysterical Frankie Valium - in both his musical number and storytelling.

Jude was played by Rosemary Terry, an incredible actress I was lucky enough to go to university with. All bias aside, Rosemary is wonderful and my parents agreed they could watch her for hours. Those eyes! But in all seriousness, her portrayal of Jude breaking down on London Bridge, afraid and alone, was just so moving.

Jonny And The Baptists: The End Is Nigh 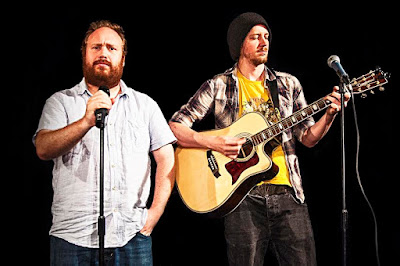 We saw Jonny And The Baptists last year and so knew what to expect - these guys are brilliant, performing musical comedy numbers and bouncing off each other with such a fun chemistry. Where last year felt like a comic gig, the Paines Plough Roundabout gave way to a performance that felt more theatrical but also more inclusive.

Following previous political outputs, the guys acknowledged the election result and, through a worrying promise to Jonny's four year old niece to solve climate change, chose to tackle this issue, in their usual ridiculous, epic way. (Side note: guys, can you please write a full musical one day? I feel like it'd be incredible.)

Also a shout out to Backstage In Biscuit Land's Jess Thom who was in the audience with us. Her contributions throughout (Jess has Tourette's Syndrome) really added to the show - with one in particular prompting a round of applause, and me cry-laughing. I'm so hyped to see her show.


Having caught up with a friend after an earlier show (Rosemary!) we took onboard her strongest recommendation for Five Feet In Front at Summerhall and again, so glad we did.

The story here follows Jonny Wilo, a girl oddly named after her father who has been killed a year previous. She talks to, and makes a deal with, the wind: to find something good in her town, to save the community from an incoming storm and certain death.

It's an odd little tale and I loved it for that reason - as an escape from the everyday. It was also told in the most brilliant way: with a chorus of singing folk musicians, with the most gorgeous voices and harmonies, but also tap dancing in a powerful stand-off between Wilo and Wind, and visual effects through lights and shadows. It felt like every element was considered in a way that surpassed other Fringe efforts.

This magical piece reminded me of a mix between a Steinbeck novel, a Studio Ghibli animation and a Tarentino film. And turns out I bloody love that combination.

It makes me sad that with a cast of six this show may struggle financially to tour and just hope it has a further life: I could even see it developing to a longer, mid-scale piece. The Letter Room are a young company with a wisdom beyond their years both in concept and execution, and I only hope they can be supported to share this work with as many as possible.


Read about our second day at the Fringe here, when we saw Ross & Rachel, Iphigenia In Splott, Spillikin, and Sofie Hagen.