Around 8 months ago I was having a lazy Sunday afternoon catching up on blogs and social media when I stumbled across a post from fashion blogger Lily Melrose about her "Contiki Asian Adventure".

I clicked through and found out about her two-week group tour through Thailand, Laos and Cambodia. She'd had an amazing time, and I was jealous.

Before then, I didn't know travel could work this way. I thought of "going travelling" as something you did for months at a time, by yourself or with a friend, but definitely not suiting working full-time.

Suddenly it became entirely plausible. I decided pretty immediately to do it and that month I booked the trip for May, leaving a day after my 25th birthday.

After months of saving, excitement and anxiety, the trip finally came around, and then went way too quick: I didn't want it to end!

One of the best parts of the trip was that I didn't experience it alone but with a group of 28 others, mostly solo travellers with some groups, all 18-35 years, and from all around the world. They started as strangers but very quickly we got so close and I now feel lucky to consider them friends.

Ahead of the trip I'd been a little nervous about meeting so many new people in one go but I needn't have worried. Everyone was so lovely!

(If you think this trip would be out of your comfort zone you're probably right, but it's the same for everyone, which makes for a really welcoming, curious and fun group mindset. You'll be fine.)

The trip has something for everyone too, suiting any personality with stunning sights, culture, history and just plain old good times.

We saw so many temples, from impressive gold constructs to intricate stone carvings. We were blessed by a monk, sailed down the Mekong river, bartered at night markets and ate street food.

We did too much to tell you but all of it wonderful! Which is why it's hard to pin down highlights, but something really special was the Thai cooking class in Chiang Mai.

A local chef showed us around the food market, with as much banter (such a joker) as knowledge on the fresh ingredients he was showing us.

Then in an open-air kitchen in the countryside, we learned how to make authentic Thai food. With guidance we made our own dinner consisting of four separate dishes, and it was genuinely one of the best meals on the trip!


Another really special moment came on the last day when we experienced sunrise at Angkor Wat. Bleary eyed from lack of sleep we stumbled along, to be met by the most stunning view. We were just blown away by the beauty of the place and it felt like a real privilege to be there. Here's the view from Rainbow Bridge, "where earth meets heaven". 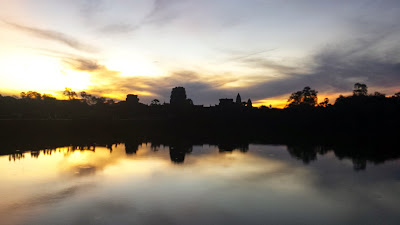 We just generally had the best time with great meals and nights out, and constant laughs along the way. And the last night really was the best. 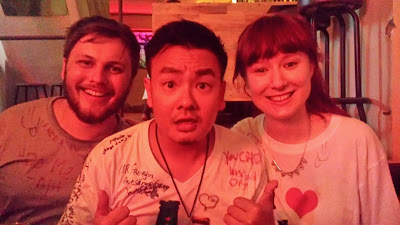 Amidst all the sights and experiences, I loved just seeing the everyday in the places we went: children playing outside their houses, cows walking down the street, buddhist monks going about their day, families living in houses on the lake surrounded by water, and even the kind of infuriating tuk tuk drivers!

While the trip is fast-paced, you really get to soak up the atmosphere of each place you go: the sights, smells and sounds of a place worlds away from home. We also had lovely and often funny local guides who'd talk to us about their lives, their town, the culture and the history of a place.

And the history was both fascinating and devastating. Having fallen in love with these countries it was awful to hear what they've been through, and what they're still going through now.

In Laos we visited the COPE centre and learned about how between 1964 to 1973 two million tons of ordnance were dropped on the country: every eight minutes, 24 hours a day, for 9 years. A third of these bombs did not go off at the time, and are still risks today. This rehabilitation clinic provides necessary, life-changing support, including prosthetic limbs, to those affected.

Then in Cambodia we heard about the reign of Pol Pot, when 3 out of the 8 million population were killed over the space of four years. We visited The Killing Fields where over 20000 innocent people were brutally murdered, and also the genocide museum, which was the prison at the time. It was so disturbing to hear of what happened, and really made us stop and think.

The fact these atrocities are unknown to most of us makes them all the more shocking.


So, a really varied fortnight. I would recommend this trip to anyone, and with this company. We saw so much, were looked after, met amazing people and just had the best time. You won't regret it!

For a full day-by-day itinerary and trip details, visit the Contiki website here.

And for anyone interested, in terms of my health - I mostly coped! For those that don't know I have a chronic illness called POTS which causes a fast heart rate, fatigue and fainting. I'm doing really well on my meds but knew this trip would be a challenge as heat is a trigger.

I doubled my medications up to maximum dose (with approval from my doctor) and just tried to stay hydrated and know my limits. The trip was exhausting, I did pass out (but only once!), and sure I struggled a little, but I still had the time of my life. Even a year ago I would not have been able to make this trip, and knowing that made me appreciate it all the more.

I'll post a few more photos, but if you're curious about the trip and have any questions, please do comment below, tweet me @amyjanesmith or drop me an email!