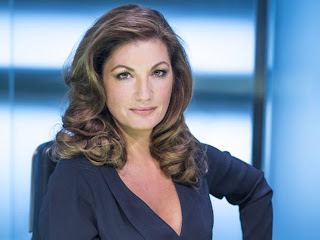 She's the strong, silent and ever-so sassy advisor on The Apprentice. That's how I knew her and not much more.

Browsing for my next read I stumbled across Karren's autobiography and thought it might make an interesting read. And that it was!

Having skipped the traditional route of university Karren went straight into the world of business and was Managing Director of Birmingham City by the age of 23.

She's built up an overwhelmingly impressive career and has learned a lot. She shares this with solid advice to inspire confidence and behaviours that will help guide you through life and work (not just business). Just to look at her life and career is inspiring but the way she writes is genuinely rousing and energising.

Karren dismisses the idea that a good leader is founded in gender-related qualities (obvs), yet she doesn't shy away from engaging with issues surrounding being a woman in business, specifically in football-based business: both raising a family and dealing with other people's bullshit. She's a proud feminist, fighting to get more women on boards. And that's wonderful.

Anyhow, I found myself constantly underlining little pieces of wisdom so I thought I'd do a post to share some of those. But do go read the book.

"I learnt never to belittle my contributions, and to say thank you when people paid me a compliment about my work. I didn't say, 'It's nothing', because it wasn't nothing. And if I didn't value it, who would?"

"Self-esteem eliminates fear... [it's] about valuing yourself and your opinions and not being afraid to voice them."

"...nobody will champion you or your career if you don't. I never waited for someone to say, 'You did a good job.' I'd be saying to people, 'Look at what I've done! Isn't it great? Shouldn't I head up the next project?' To me, that was a more straightforward approach."

On dealing with difficult people

"I have never let people put me down, make me feel inferior or say that I wasn't good at something. It's about being able to say, 'I'm sorry, you may think that's acceptable, but I don't.' I think that comes from that inner belief in myself."

"Handle the difficult men with class. It's important to be decisive and shut down a problem effectively and quickly. You must stand up for yourself and show that you cannot and will not be intimidated."

"I meet a lot of people with great ideas, but they lack the energy and determination to see them through. But if you're determined, with a steely core and a can-do attitude, you're an entrepreneur."

"A lot of people fear failure so much that they can't achieve anything."

"Calculate the worst thing that can happen and be comfortable with it."

On dealing with difficulty

"If you panic in the face of a problem, you're going to have an unhappy life because life is a series of problems. How happy you are relates to the solutions you find to deal with them...For me, a problem is an opportunity to show off my talent and put everything I know into action."

"No matter how bad things are, no matter how hard the battle you face, you have to accept the reality of the situation and embrace the pressure. You just have to take the view that it has to be done."

"Before you achieve success you nearly always face temporary defeat - sometimes total failure....success is about having the backbone to work a way through."

On the power of personality

"No matter how much you know, you have to have the personality to deliver it. People need to have confidence in what you're saying."

"Great leadership is as much about paying attention to the nitty-gritty as it is about sounding the part."

"The best leaders are not afraid to work with and listen to people across a broad spectrum, and they get excited when they meet people better than them. That's because they are confident in their own ability."

"...in an ideal world everyone would have a near-death experience that turns out all right. It teaches you an awful lot about yourself....it teaches you the importance of doing the things you want to do. About aiming high and asking a lot from life."

"There's this idea that if you're a woman and you put yourself out there, you've got to take on the chin whatever anyone wants to throw at you. But why?"

"I want to defeat this view that successful women are a special breed - actually you just to have to work bloody hard, to have an idea, go for it and be dedicated to it."

"Have confidence. Walk tall. Be direct. Never be afraid to be a woman."

On balancing having a family with a career

"What I now appreciate, and didn't understand then, was that a career spans a lifetime, and that taking a few months off would not have harmed mine." [Karren took just three days' maternity after her first child.]

"In my experience, there is never an ideal time and worrying about when will often mean you leave it too late and miss out. If you think about things for ever, you can come up with as many reasons not to do something as to do it, so you have to just go for it."

And a reassuring truth