Who Are Our Audiences and How Can We Engage with Them Better? 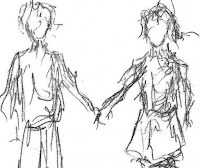 Yesterday I spent an afternoon at Canada Water Culture Space in brilliant company: a room full of theatre marketers, critics, writers, artists and even audiences themselves - all wanting to talk about how to engage better with audiences and also with each other.

I'm not going to attempt to draw any coherent conclusions from what we talked about. There was so much discussed and from completely different perspectives, which felt like a real rare opportunity.

I might delve deeper into specific issues another time but for now, these are pretty much my notes. Just little fragments of interesting things which could lead somewhere. As we talked about, each venue and each artist will have different objectives when it comes to engagement: it's not one size fits all.

I'm sure the organisers themselves will get something up, which will be much better articulated, but I thought it might be helpful to share these, even as a long, rambley, and very note-based post. So here goes...


We kicked off with a brief talk from The Guardian's Lyn Gardner coming at the discussion from a press perspective.

She shared her thoughts on the current state of relationships between critics and venues/artists, that it's not very grown up and a bit of a with-or-against situation.

There was a sense of frustration at the idea from venues that it'd be the critic's job to help sell tickets - that without four or five star reviews their show will flounder. That's not the responsibility of the critic. From this, the issue of star ratings came up and how problematic and simplistic they can be.

Then, crucially - how do you tackle the idea of people thinking theatre is "not for me".

We then had Stewart Pringle, Artistic Director at the Old Red Lion Theatre, to talk us through forward thinking, using Caroline Horton's Islands as a springboard. How much is revealed to the audience pre-show? How much is helpful?

There is a common perception that new writing, new work in general, should "speak for itself" - is this fair? The idea of other voices available at point of purchase beyond marketing copy, and curated by the artists themselves. Then following this with interesting and informative freesheets/programmes.

We finished with Amber, Executive Director of Camden People's Theatre and Head of Communications at The Albany, talking through her experiences from both venues.

She discussed focuses on supporting new artists, and the community too - with examples such as homeless groups using a culture space. There's no naive assumptions they will go on to be bookers, but just a genuine, alternative way of engaging in the arts.

Helpfully, she asserted that you can't be all things to all people. For example, visiting a venue on one night and seeing a not very diverse audience and presuming there's no thought/strategy - it's not realistic.

It's about specific schemes, specific shows and venues - what are they looking and planning to achieve? Then it's also about clarity around this and transparency as to what you're doing.

So, a lot to think about! As I say, these were just my (limited) notes from what was said, but perhaps helpful anyhow, if only to prompt further ideas.

Hopefully I'll get to another of these - it was so nice to share frustrations and potential ways forward, with such a wide range of people.

Find out about Dialogue here.