What I read in July: #GIRLBOSS and Sane New World 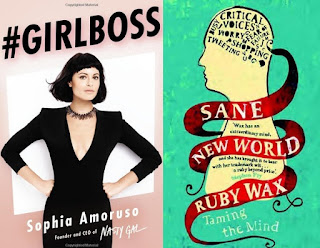 I'm at the computer and online everyday for work so I've started beginning my weekends in quiet, just reading, and finishing my days this way too (though this feels a little more difficult somehow). I feel a lot better for it: I feel calmer (more on that later).

So, I thought I'd start doing monthly book posts! I tend to pass on recommendations in person or do a quick tweet but never really blog, so thought why not.

These are the books I've read over the past month... 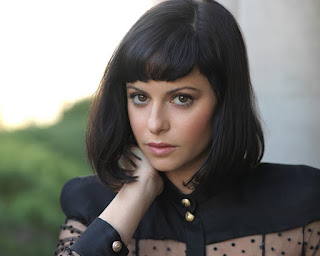 I'd seen Emma at GirlLostInCity (read her blogpost on the book here) and Anna at ViviannaDoesMakeUp both tweeting having loved this book so after a quick search I decided to give it a go.

#GirlBoss is Sophia Amoruso's story of going from a girl sat at home selling vintage clothes on eBay to the CEO, Creative Director and founder of Nasty Gal - an online fashion brand now worth over $100 million.

She started the business with no debt and only took on an investor when she was already smashing it and wanted to take it to the next level. Basically, she's pretty incredible - and your new hero.

It's part life-bible and part business book but it's not a feminist manifesto. Having done some post-reading YouTube-watching (there's some great videos of Q&As at conferences) it seems it's a question she gets asked a lot - about being a woman in a man's world - but gender doesn't really come into it.

What's more interesting is the transition between being a bit of a screw-up, beginning with endless short-lived jobs, no direction and an anti-capitalist attitude, to who she is today.

She didn't dream of her little business ending up this way. There was no business or five-year plan at the beginning - it just started as something she enjoyed, was good at and could do from home. It quickly escalated and she learned as she went along, with her drive and ambition increasing in line with the company's growth.

While Nasty Gal is a fashion brand, and a sassily named one at that, it's important to note that the message here is that being a "GirlBoss" isn't about acting like a badass or dressing to kill - it's about working hard and getting shit done.

It's about not giving up or presuming you can't do something because you don't have the training or contacts. It's about making the most of opportunities available to you and pooling resources: learning from your peers and free education via YouTube, Google, LinkedIn, etc.

If you're looking for a how-to on creating a million-dollar business, well, it's not as simple as that. This is Sophia's story and you will take things from it but it's not a textbook.

Working in marketing though it was interesting to read how her business was originally built through social media back in the days of MySpace. Her commitment to, and understanding of, the power of a strong brand is evident throughout. She goes into detail on things she learned through experience too: changing image thumbnails on listings to see what would sell, responding to customer comments, targeted social marketing before that was a thing, and so much more.

Naming her book with a hashtag was also a brilliant move and an example of free, clever marketing. As this links so strongly to the brand there's nothing cringey about the move: social media wasn't a sideline of her business, it was the crux of it - and that continues on today.

#GirlBoss is an easy read and one which I felt compelled to finish over one weekend. Her writing style is relatable. She looks super cool but she's been an outsider and that comes across. It also left me feeling really motivated. If I wanted to do something, I could do it - I just needed to put the work in. It's pretty common sense but her story and the way she tells it is just so energising.

Ruby's stage show Losing It was a bit of a turning point for me. Back in March 2011 I went along to the Menier Chocolate Factory, interested in her take on depression and mental health.

The show was brilliant and moving with moments which mirrored my own. The feeling of the world zooming around you while you stay static: unmoving, detached, desperately sad and inadequate (thankfully many years have passed since my experience of this but if you want to read my blogpost on depression, click here).

However it was the post-show Q&A which really made the impact. It became less of a Q&A and more a series of thank yous followed by people sharing their own experience. In an auditorium full of strangers my dad shared his thoughts and experiences and shortly after I shared mine. I never would have anticipated doing so, and it was just so liberating.

I blogged about the show, and later shared my own experiences in the blogpost linked above. Without Ruby's show I couldn't have done that, and the post seemed to touch a lot of people. It made it easier for me to talk about mental health in person too.

At that point I think Ruby was at Oxford studying a masters in mindfulness based cognitive therapy. Since then, she has graduated and written a book about what she has learned.

The book is split into five sections: anecdotal experiences and insights into the world ("for the Normal-Mad"), what happens when mental health declines ("for the Mad-Mad"), how the brain works, how mindfulness works, and alternatives to mindfulness.

While largely funny and often on-point, I found myself frustrated at some of the first section. She makes bold statements but at times it felt a little damaging and overly-negative (but then hence the need for mindfulness, and it is coming from a depressed outlook - perhaps my distance from that now makes it an odd read).

Still, it's her life experiences - which are accompanied by a statement saying as much, and that you might not agree with it all.

One point which stung a little though was this line in relation to openness around mental health: "...quivering in case someone we know finds out, or worse someone at work finds out and we're either dismissed (the company probably will say for other reasons) or treated like a person with Ebola" (p260 in Kindle version).

Undoubtedly this is the experience of some, or even many, but not the experiences of all. To imply that opening up would inevitably lead to social rejection and dismissal from a job is scary, and only exacerbates the stigma around mental illness. This could lead people reading to feel less likely to open up, and potentially get some help from their peers, colleagues or managers - and for a book about mental health this seemed pretty ridiculous.

Anyway, moving onto the next section. Reading how the brain works was fascinating. It's really technical stuff, it is neuroscience after all, but through Ruby's engaging style it was easy to read. Of course jokes are thrown in for light relief - sometimes these disrupted the flow of reading but it does increase accessibility: this isn't a text book and it does perhaps make it all easier to process.

While I knew serotonin levels decrease with depression, that was about as far as my understanding of the brain's biology went. You discover all the different parts of the brain and also hormones, what they all do and how they work together.

Finding out about dopamine and how it can be helpful and productive or veer into addiction was interesting for example.

Also just how adaptable the brain can be: it can be trained to do new things (learn a musical intrument for example) but it can also be trained to think in new ways. I won't go into the science of it but the concept is called neuroplasticity and it's hugely reassuring. It's so easy to define yourself and say I'm a worrier, or I'm always late for things, but that doesn't have to be the case.

I knew this already from how much I've changed - from feeling inadequate and anxious a lot of the time (even if not conscious of it) to calm and more confident. That was through books such as Susan Jeffer's Feel The Fear And Do It Anyway, CBT, exercises such as writing through feelings, thoughts and habits but also through life experiences that made me focus on other things.

To see the science of it was motivating though and made me think about other areas of my life.

Linking onto that, the mindfulness section made me want to read another book on mindfulness. That's not to say it wasn't helpful, just that I now feel the need to explore the subject more and perhaps even go on a course.

Ruby clears up a common misconception when she explains that 'it's not even about relaxation but about witnessing whatever's going on without the usual critical commentary.'

Reading about what it is and how it works made me realise how much I, and probably many others, could do with this in our lives.

Actually reading this book in itself was helpful. I think whenever you're doing something where you don't think to look at your phone (a constant, awful habit) - that is so good for you and most likely when you're happiest. In that moment you're focused on what you're doing and in the 'state of being' Ruby talks about (don't worry, she addresses the ridiculousness of that phrase). It's bad that it's so hard to just sit and do nothing.

Sometimes when I'm feeling anxious, which still happens now and then, a book will always calm me down. With the internet, magazines and telly there will always be so many different perspectives fighting for your attention. With a book it's just the one.

They say that we now have a short attention-span but I don't know if that's true. That's what we're getting, but it doesn't feel good to me. It's pretty exhausting.

Anyhow, through this book it's evident that change is completely possible, it just takes effort.

Sane New World isn't just a book for people with experience of mental illness. If you do, you'll probably get a lot from it, but even if not it's a book about how we as a human race work: deep down in our brains but also patterns in modern life. It also might be a good one to read prior to a psychology/counselling course as a nice little introduction that could make the neuroscience side of it easier to process when it comes to it.

It's also funny and not as heavy a read as it sounds!


I'm making a little list of what I want to read next so if you have any recommendations please send them my way!