Going to a theme park with Dysautonomia (or another fainting condition)

I used to love theme parks. My now best friend and I bonded through going to Thorpe Park in 2009 when we didn't know each other very well. We went on all the rides, laughed a ridiculous amount and just had the best time.

When I got ill with POTS and was fainting all the time I wouldn't have even considered going somewhere like that. Standing up would trigger an episode so rollercoasters would just be pushing my luck.

I'm doing so much better these days, rarely passing out and the Ivabradine has really helped the tachycardia too - I'm now hardly ever conscious of my own heartbeat, which is lovely!

So, when we were considering where to go on holiday, Salou seemed like a good choice. The weather wouldn't be too hot and there was Port Aventura - the theme park which used to be owned by Universal Studios and which I had such fond memories of visiting about ten years ago with my family.

After my last slightly disastrous holiday (Turkey in 2012, lots of passing out, getting paler and paler and weaker and weaker) I was a little nervous but I'm pleased to say my body behaved itself and we had a wicked time!

So, as people are often asking on the POTS and dysautonomia groups what people's experiences are of going on rides I thought I'd go through how it all went.

First thing I'd say is that it's different for everyone, so talk to your doctor. I spoke to my specialist back in January about this and he said that as I don't have a major heart defect I should be fine, and that it would be the queues that would be more of a problem. This makes sense as standing relatively still for any length of time still tends to be problematic.

I emailed the park to see how to go about skipping queues and they asked for me to bring a medical note. King's were able to write something for me which was really helpful. He did enclose a separate letter saying although it should be fine to be careful as rides can mess with blood pressure, and to make sure I was completely covered with good travel insurance.

When we arrived we went to customer servives and after checking the note and ID (don't forget passport or driver's license. I only had my EHIC card on first day but was fine), they gave us a pass for two of us to get straight to front, either via disabled or fast pass entrance.

The next day it was a different person who was a little funny about it, asking for a disabled card and initially refusing when I only had the letter. I tried to explain how the condition and fainting works and then she was fine. Think she'd rather give the pass than deal with me jabbering on at her or being on the floor in a line!

We went on the first rollercoaster we saw as we got into the park, not even really looking to see what it was like. Turns out it was the Furious Baco, the fastest rollercoaster in Europe. It was definitely fast but it also felt incredibley rickety with my head shaking from side to side, and also going upside down.

I got off and felt a little shaken up, literally and otherwise. I thought I might pass out but I was actually fine, just didn't really enjoy the ride that much.

We went on some more gentle rides and then headed for Hurakan Condor, the vertical tower drop ride. This is one we'd seen from our hotel balcony, the tallest building on the Salou skyline - so slightly daunting. I think skipping the queues also definitely helped in not getting ourselves worked up, we just got straight on the ride!

This one was absolutely fine. Scary, sure, but no bad physical effects. Success. 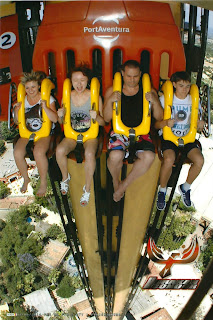 After a few other rides we finished the day by going on Shambhala - the tallest rollercoaster in Europe. We hadn't planned for this to be our last ride, but it sort of had to be.

I loved this ride. While it was super high and fast, it was smooth and no upside down moments. It was only when I got off that I didn't feel great. I sat in the shade, made use of my cooling spray and drank a lot of water. I just felt unsteady, and think the ride had definitely affected my blood pressure. Still, we'd already had a wicked day so headed home.

The next day we went we started later in the afternoon having already done most of the rides. We headed straight for Dragon Khan. With eight loops in 69 seconds, perhaps this was a tad ambitious.

At first, I was screaming on every loop and drop. Not quite enjoying it but getting through it. Then I just started to feel really terrible. I felt myself blacking out. Joanna clocked I'd stopped screaming so checked I was okay, I think I was semi-conscious, not fully gone but definitely not all there.

Again, we got off and I had to sit in the shade. I rested my head and closed my eyes but felt like the world was spinning and my heart was going so fast. I then had to go and be sick in the toilet (classy, I know). So all in all, not a good experience - demonstrated by this ghost-on-the-verge-of-tears ride photo. 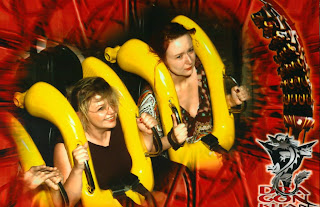 Anyway, we timed it well as the Generation Forever show (surprisingly impressive and a lot of fun) was about to start, then slowly made our way to two water rides, which actually made me feel so much better.

The fact I didn't pass out after any of this shows just how well my medications are working.

So as well as talking to your doctor and getting a note to skip queues, some other things worth bearing in mind... 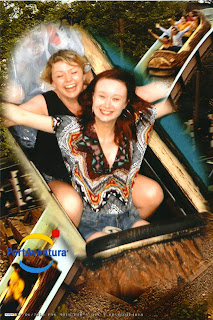 Do you have any other good tips for going to theme parks with a chronic illness? Let me know!

Click here to read what else I've written about POTS.