Positive inspiring quotes (especially if you have a chronic illness, but even if not) 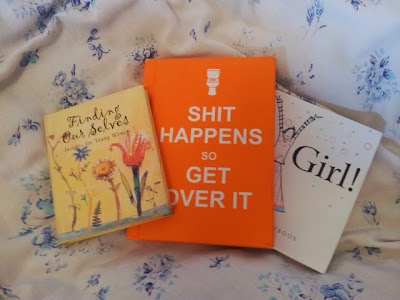 I've spoken before about how much I love quotes. They're always nice to read through but one really stuck with me, which I've posted several times before but I'll share again.

"If you can't fly then run, if you can't run then walk, if you can't walk then crawl, but whatever you do - you have to keep moving forward."
Martin Luther King

Some people turn to their religion in times of pain, but for me it's reading quotes like these that really helps.

The Martin Luther King quote has become a bit of a mantra. Even if I'm not consciously saying it to myself - it reminds me to keep going. As tempting as it is to give up sometimes (whatever that means), it would make the experience so much harder.

Also, I've said it before but I'll say it again. Positive thinking isn't about denying pain or bad times, or thinking that these thoughts will make you instantly happy. They won't.

For me, they just provide a source of inspiration - not necessarily to get to a happy place but to motivate me into keeping going and finding a bit of strength.

Anyway, if there's one quote here that you will remember and that will help in some way, then that's ace.

"If opening your eyes, or getting out of bed, or holding a spoon, or combing your hair is the daunting Mount Everest you climb today, that is okay."
Carmen Ambrosio

"One can never consent to creep when one feels an impulse to soar."
Hellen Keller

"Some people say I have attitude - maybe I do. But I think you have to. You have to believe in yourself when no one else does - that makes you a winner right there."
Venus Williams

"There is a microscopically thin line between being brilliantly creative and acting like the most gigantic idiot on earth. So what the hell, leap."
Cynthia Heimel

"If you are going through hell, keep going."
Winson Churchill

"You may not realise it when it happens, but a big kick in the teeth may be the best thing in the world for you."
Walt Disney

"There are hazards in anything one does, but there are greater hazards in doing nothing."
Shirley Williams

"There's something so vibrant and gutsy about courage; just do it."
Anna Roddick

"Do what you can, with what you have, where you are."
Theodoore Roosevelt

"Perhaps our eyes need to be washed by our tears once in a while, so that we can see life with a clearer view again."
Alex Tan

"Our greatest glory is not in never falling, but in rising every time we fall."
Confuscious


What are your favourite inspiring quotes? Like Chronic Perseverance on Facebook for daily inspirational quotes, especially pertinent if you have a chronic illness but even if not.