December 31, 2013
As 2013 comes to a close, I'm looking back on my year - and all the theatre I've seen. I feel lucky to have seen such a lot, with my health being a little better and also having the benefit of working in a theatre. So, these are my top ten productions - in no particular order... 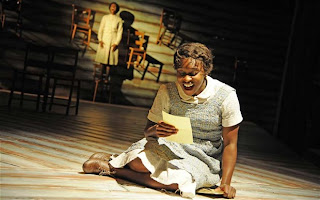 So I said this was no particular order but this feels like my show of the year. I didn't know the story or musical before booking up, but the Menier Chocolate Factory always have such quality productions.

Cynthia Erivo absolutely stole the show with a stunning and powerful performance, but the cast as a whole were outstanding. The acting in this show far exceeded anything I'd seen in a musical before.

At curtain call and after Cynthia sings I'm Here - the atmosphere was electric. I always find curtain calls quite moving after a good show, but here I felt like sobbing and cheering all at once. Quite a unique sensation.

Click here for my full, and rather gushing, review of the production. Also click here for a video of Cynthia singing I'm Here on the opening night of previews.

The Book Of Mormon


Since South Park The Movie I've always hoped that Trey Parker and Matt Stone would go onto write a musical, and I was so happy when they announced they were - in partnership with Robert Lopez, writer of one of my favourite musicals - Avenue Q.

Sure it's outrageous, and I've never heard this kind of language used on a West End stage before, but it also has a lot of heart - with the main message being of empathy and acceptance. It's just a really stellar score, and it's a heck of a lot of fun.

Click here for my full review of the production.

The Paper Birds' Thirsty was perhaps one of the first productions I watched in The Marlowe Studio. Exploring women and their relationship with alcohol, and with eachother, the production flitted between humour and starkly moving moments: both of which were met with recognition, as we realise just how shared these experiences are.

The production was innovative - mixing personal stories, verbatim text and movement - all so strongly evoking the nightclub, the spinning head and the morning regrets of alcohol.

It's hard when a production has so much hype behind it, going into it with such high expectations - but Theatre Ad Infinitum's Translunar Paradise lives up to the hype.

The production has been described as the theatrical equivalent of the first ten minutes of Up and that is completely accurate. This is the story of an elderly man getting through the loss of his wife - with scenes in the present through masks which are stunningly removed to replay their memories together. It was so, so moving. This company really are beyond brilliant. 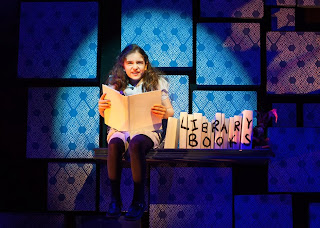 It's an obvious one - of course it's a great show. Tim Minchin's brilliant writing, Peter Darling's choreography and Matthew Warchus' direction make this a delightful and off-beat musical.

Children's presence in shows can often get into cloying territory - but this show perfectly captures their cheeky nature. Kudos to the creative team and those at the theatre, with even the front of house displays continuing to evoke the spirit of the show.

Matilda The Musical plays at the Cambridge Theatre.


Soho Theatre and nabokov's Blink was a completely charming off-beat, and wonderfully imperfect, little love story. Two wounded quirky characters finding their way through grief find each other - and so begins a relationship of sorts. I guess you could say it's the British, theatrical equivalent of 500 Days Of Summer - except Phil Porter's writing is so honest - about grief, love and loneliness.

Blink is at the Soho Theatre until 11 January then at The Marlowe Studio (Canterbury) 7-8 February. Click here for a video trailer of the production.

Ballad Of The Burning Star 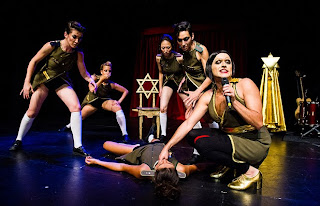 Theatre Ad Infinitum are the only company who feature twice in this list - and rightfully so. Having now seen three of their productions they really are eclectic in their output. You'd think a drag star backed up by a dancing troupe of divas might not be the appropriate creative outlet to tell the story of Israel and the history of the Jews, but it really is.

I think you can often tell the quality of a production from whether it stays with you and this one did. It lingered on my mind - the energy from the ensemble on the night was intense, but the emotion and thought left from the production was potent.

Click here for my full review on the production. Ballad Of The Burning Star is touring in Spring 2014.

Fleabag was hilarious, honest and at times - completely grim. We were taken on this story, swept away to the point of a collective sigh at a guinea pig's plight, followed by a laughter of realisation at the ridiculousness of our reaction.

Phoebe Waller-Bridge's writing and performance created a new kind of powerhouse performance - one of the modern woman: imperfect, brutally honest and so funny. I look forward to hopefully seeing Waller-Bridge again in The One, winner of Verity Bargate Award, and again at the lovely Soho Theatre.

Daniel Kitson - After The Beginning, Before The End

Daniel Kitson is a comedian - one I hadn't heard of before but was strongly recomended by a good friend. His stand-up is often innovative, but here it was to the point of being theatrical.

Sat behind a desk and talking us through his observations and memories, with the aid of a tape recording of a half, or rather mis-, remembered story, the show was reminiscent of Spalding Grey's work: storytelling in a stream of consciousness manner. In all its self-deprecation, the production was strangely life-affirming and uplifting.

I wondered whether to include this on the list. I wasn't at the Barbican for this event, but it was still one of my most memorable theatrical events of 2013. I tuned in for several hours over the course of the 24 hour production. For me, it was worth including as a note to the changing way in which we take in theatre.

The live streaming brought together an online community, and brought new people to Forced Entertainment's work. Much the same way as we tune in and out of telly, this form of output made a durational work accessible and exciting - with many (including myself) missing the stream once it was off air.

Click here to read my full thoughts on the event and Forced Entertainment.


What have been your theatrical highlights of the year?