POTS: the "other" symptoms 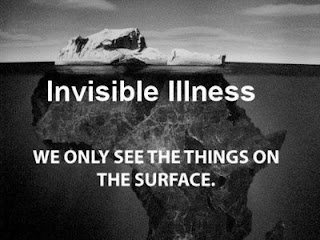 POTS is one of those invisible illnesses - well it is, until you're on the floor. That's a very evident symptom but there's often a lot more going on under the surface, everyday and without people realising.

I tend to just crack on - even if I'm not feeling great and I worry that perhaps the perception would be it's only the fainting that causes a problem. Actually this is now one of my less frequent symptoms - it's just far more visible and also harder to deal with.

There's a difficult conflict of desires - where I want to carry on as normal and have no fuss, but also for people to understand the condition and the problems that it causes.

So I thought I'd do a little blogpost about the other symptoms - as if you know someone with POTS or a similar form of dysautonomia then you may be very aware of what happens with the fainting but not so much the other symptoms.

Also some people with POTS may not faint at all so the above will be irrelevant, but the below should be more relevant!

One of my biggest and most frequent symptoms is pain. I get awful pain in my legs which I understand is from blood pooling in this area - another example of my body's difficulty in working against the concept of gravity.

The pain ranges from a dull ache to excruciating - to the point of crying and praying for it to stop. It gets that bad.

It doesn't happen everyday. Often it will be there subtly with a dull ache, and going wild on the fluids and salt is enough to keep it from worsening. Other times there's no stopping it - and when I have bad pain I'm learning that I'm more likely to pass out.

As well as these leg pains I also get chest pains - these are usually sharp and shooting, and can last for between seconds and minutes. This can be tricky - as I wonder is this a usual symptom or is this something I should actually worry about.

Also within this category are headaches - not so much a problem these days but horrible when I do have them.

Tachycardia is also a big one which is much less of a problem than it used to be, but can still prove troublesome. Tachycardia is when you have an abnormally high resting heart rate - usually over 100bpm.

When the heart's going this fast and for extended periods of time, it's really tiring. Imagine the effort and exhaustion of exercise, without any physical exertion to prompt that feeling.

One mental repercussion of either a syncopal episode (passing out) or extended pain or tachycardia is a feeling of brain fog. This is particularly frustrating because it's difficult to power through and get things done when feeling this way.

What I basically mean by brain fog - is feeling mentally slower and unclear. One example of this is when back at work the next day after being very symptomatic, I really struggle with typing. Usually I can touch type no problem and without thinking about it. In this state, my hands presume I'll be able to perform this usual activity, but it just doesn't work. So I end up getting frustrated and hitting the back space key a lot.

Other ways brain fog can manifest itself is just generally feeling very unfocused. Usually I'll have a mental list of things I need to and can just crack on with that. When feeling like this I keep having blanks, forgetting what I'm doing in the middle of doing it but also struggling with an overall sense of purpose.

If I'm feeling rough combined with that, I know that's when I need to call it a day as there's no chance of being productive. Other times it's not so bad and I'm finding ways of adapting to deal with that, such as making more physical lists and online reminders to help keep track of what I'm doing.

I also sometimes struggle with losing track of a conversation, or forgetting the word for something - finding myself stumbling into silence as I just have no idea how to finish the sentence.

Another symptom I thankfully seem to get less often now, though it still sometimes rears its ugly head, is nausea. I've sort of gotten used to pain, at least when it's a low sort of pain, but when feeling nauseous it's hard to think of much else. I've never actually been sick when feeling this way but it's this horrible feeling - like you need to be sick but know actually you won't.

Nausea's also difficult as you can't just pop some pills for it. I've heard that ginger helps so I sometimes turn to ginger biscuits, but I'm not sure if that even works. I do love ginger biscuits though so it's a nice excuse to have a little treat anyway.

And last but definitely not least - fatigue. This one's difficult to articulate and for people to understand. I think with some of the other symptoms people have reference points, ie they can recall a time when they were in a lot of pain and can sympathise. With this, there's not so much of that. One way to describe it is that it's like the feeling of having really awful flu, just without the fever etc.

What I will say is that it's so much more than being tired. Being tired is natural but with this - it's not going to away with sufficient rest and sleep. It also feels much heavier than that.

I've had someone comment that they wished they could have stayed in bed longer that morning too. That's hard because in that case, all I wanted to do was be up and about - but all I could do was be in bed - feeling like I'd been hit by a truck.

When I've had bad fatigue, and usually after bad syncopal episodes but sometimes unrelated, this will also be paired with muscle weakness but also tiring very quickly, becoming short of breath and tachycardic. This is when walking becomes difficult, takes a long time and is just a bad idea - as I'm likely to do more damage than it's worth.


Hopefully that will clear up the day to day experience a bit more - though everyone's experience of the condition is different. Equally the individual's experience will change with time and differing treatment options.

Also, though I think I'll be preaching to the converted, I hope this will make people think about disability a little differently.

Something that really frustrates me is people seeing "able-bodied" people using disabled parking spaces and presuming this is fraudulent. Disability is not all about mobility - you never know someone's story so please don't judge and jump to assumptions and criticisms.

If anyone has any questions about this condition which I keep banging on about, or if you just want to share your experience of POTS or another chronic illness, please leave a comment. It's always good to hear from people.