My Experience With the Anti-Depressant Citalopram 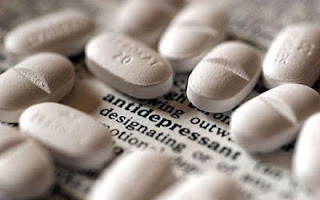 I've been wanting to write about my experience with taking anti-depressants for a while but it seemed even more urgent after Citalopram has been getting some negative attention in the news lately.

In December a medical warning was given to GPs about how the top level (60mg) of Citalopram had been linked to an increase in heart arrhythmias. The Telegraph then released this news story conveying frustration and concern about how there was no public announcement of this connection and that the lower doses had not been investigated and thus were not necessarily safe.

While there is clearly medical evidence supporting the links here, I do worry about the level of fear this may cause in current and potential Citalopram users. Whatever you do, do not come straight off the medication: this can cause withdrawal effects which can make you very ill. If you are concerned about your dosage then talk to your GP about this.

If you are ready to come off your medication then this is something which has to happen very slowly and with the guidance of your doctor. Citalopram keeps a lot of people well and it seems foolish to abandon the medication on the basis of this study, surely it would make more sense to consider this if you are displaying these symptoms or if you have a risk of heart problems in your family.

There is a commonly held belief that anti-depressants are over prescribed but I have doubts as to whether this is true. So often I hear of people who are depressed but very stubborn about taking medication: they are ashamed and feel they shouldn't need to take tablets to feel better but also they are afraid.

They are afraid because of potential side effects, because they fear they may have to be on medication for the rest of their life, because they feel they may lose a sense of themselves and their ability to experience emotion etc etc. The list goes on and now we have this new medical research to add to this list of concerns.

When I got depressed for the first time in autumn 2009 I was very ill and I was offered anti-depressants. I outright refused. I'd seen my Dad had difficulty with medication: he'd had a bad time on Prozac and then changed to Citalopram. He still didn't seem himself and I was scared of this.

The real reason for this was that he was still getting over his illness. So even though depression had changed me beyond recognition and taken away any trace of myself - I refused medication on the basis that it might "change" me. That is sadly the logic of someone who is scared.

One year later I found myself in the same situation and was faced with depression once again. I was suffering so much and yet was still stubborn as ever about going on medication. I remember texting my Mum in response to her asking how I was doing and saying that I didn't want to go to bed because it would bring the next day closer.

She was realising how bad I'd got and said she wanted me to go to the doctor and start on anti-depressants. This seemed like the worst thing in the world at the time. I knew she was right but I was still so scared, though I managed to get used to the idea.

So I was prescribed 10mg of Citalopram which was then increased to 20mg. When I was told it could take 4-6 weeks for the drug to start working I was so frustrated as everyday was such a struggle that seemed like an impossibly long period of time. However I'd lasted that long and just had to hold onto the hope that this would help me get better.

After a few weeks I started feeling a bit better, the things that were such a huge struggle (getting out of bed, eating etc) started to feel a little easier. I went home for a month for the Christmas break and when I got back to Brighton my best friend was relieved to find me seeming a little more like myself. This effect continued until I was back to how I was before being ill - still with some problems I needed to work through but I was back to being able to function relatively well which I was so grateful for.

So what of the feared side effects? Well to be honest I don't really remember any side effects. I've asked my Mum if I complained of anything at the time which is itself an indicator that I couldn't have experienced anything that bad. She said I had some stomach pains but that was it. I also had some particularly vivid nightmares which some would put down to Citalopram but this was something which started before I went onto medication - so I would argue this was down to the depression not the medication.

The thing is anytime you have some kind of "symptom" after starting a medication, whether it's headaches, fatigue, nausea, etc, you're going to think it's a side effect. This may be the case but equally you may just  have a headache - there's correlation but no definite causation. If you experience something which really is bad and it carries on then talk to your doctor.

Everyone's biologies are different and so everyone's experience of medication will be different: there is no blanket cure for depression. Citalopram may not be right for you but there will be other medications that will be. When you're depressed that will be a frustrating process but stick with it and you can find something that works for you.

Something people often criticise anti-depressants for is that their effects are only superficial - that they may chemically alter your system to raise your mood but they do not get to the root of the problem. This is true. However it does not mean that anti-depressants should not be used as a form of treatment. What I found, and what was true for my Dad also, was that it was only when the anti-depressant had raised my mood that I was able to even consider my problems and deal with them through counselling and then CBT.

When I was depressed and without medication my thinking was impaired and so I was not able to move forward. Once I was starting to get better I then had the clarity to look at my past experiences but also the way I think about and deal with things. Citalopram was the catalyst for this process, without which I don't know how I would have been able to progress and move out of my depressive state.

About a month ago I took, what I hope is, my last dose of Citalopram. After eighteen months on the drug I no longer needed it.

As scary as it is to start on anti-depressants, it's also scary to come off them. As long as you come off them slowly this should not be a problem - discuss this with your doctor to ensure a safe withdrawal process. This will only happen when you feel ready and your doctor feels you have been well enough for a sufficient period of time.

If you and your doctor do decide it would be beneficial to come off medication, please don't worry you're going to come off the medication and suddenly get depressed again. Of course if you do feel you are getting ill again then be aware of these warning signs, tell someone and get some help. When you've been there before you really don't want to go there again - so don't be too proud to get help as the sooner you do the sooner you can be healthy again.

One thing I would also like to address is the flippant labelling of anti-depressants as "happy pills". This medication should return you to a normal level of functioning - it will not make you happy. If someone that is mentally well took anti-depressants it would not increase their mood and level of happiness.

Medication is not an easy solution: doctors prescribe these drugs if they think it is necessary to make the individual better and the individual usually has to often really think about what is being offered to them and to have time to mentally process and accept what is happening. The phrase "happy pills" is inaccurate and insensitive to those that have to take anti-depressants.

To reiterate, everyone is different - not just mentally but biologically. So people's experiences with anti-depressants are going to vary. My overall point is not to be dismissive of the benefits of medication because of horror stories - either from individuals or from the media. You may read of someone having an awful time on a particular drug that maybe you've been prescribed - it doesn't mean the same will happen to you.

It's like when you go on holiday - if you have an awful time you post horrible reviews of the hotel, the food etc on sites like Trip Advisor. If you have a positive experience and a pleasant time then you just tell your friends and don't make a big fuss. People shout louder when they have a bad experience but that doesn't mean it is more common.

One thing which is a likely ingredient to a bad experience however is alcohol - if you are depressed it will really bring you down but also you may not be able to handle alcohol how you did before you were on this medication. They really don't go well together so as much as you want to enjoy yourself and have a drink - maybe make sure it is just the one.

So take your time, take medical advice and take support from the people that love you. With time and potentially with medications such as Citalopram - you can get better.