May 17, 2012
I spent the last weekend at the Hightide Theatre Festival in Halesworth, Suffolk. The festival is in its sixth year but seems to have really taken off this year with Lyn Gardner even stating the festival should be renamed "the Royal Court almost–by–the–sea." This is due to the wealth of new writing being showcased at the festival. I was pretty gutted we could only be there for a weekend, although we saw some incredible plays there was so much more I wished we could have seen. Halesworth is a lovely little town and somewhere I used to visit a few times a year as we have family that live there. I hadn't been in years and so it seemed a perfect opportunity to go back when I heard about the festival. I can't help thinking this festival could quickly become an annual tradition in our family. 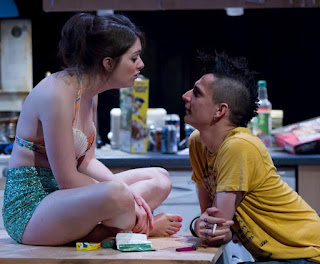 The first show we saw was Ella Hickson's Boys. I knew very little about the production before hand, only the copy from the programme which included the tagline 'Tonight marks the end of an era. It's hot. And there'll be girls. Predict a riot.' I was slightly skeptical about how accurately the play would paint us "wild" students as so often plays that focus on university students hold nothing more than a cacophony of drugs, drink and crude humour. While there was plenty of all of that in the play there was also a whole lot more. The ridiculous antics of the men living in the flat induced laughter but also brought up questions of morality: a twenty-three year old student sleeping with a seventeen year old visiting the university prompted laughter from the lads but very quickly this turned to conflict.

We quickly realise that Benny is the sensible one in the group, but this runs a little deeper than just finding problems with the morally ambigious activities of his flatmates. There is evidently some pain in his past: something preventing him from connecting with his peers who only seem focused on having fun. As the play moves on this story comes to light and we see that amidst the drinking and parties there is a dark and emotional back story which affects all of the characters in different ways.

Hickson's writing explores love, infidelity, grief, jealousy, pressure, friendship and the fear of growing up. With the media presenting a hopeless future for graduates where jobs are rare and you will never be able to own a house like the one you grew up in. There's the pressure to drink but also the pressure to be talented and to make something of yourself. A few years ago we were told we could have it all: do anything you want, you've got a degree - you'll be fine. Now it's a darker picture where this fantastic future seems to have been pulled right from under our generation's feet. Of course there are opportunities, but things are hard and Hickson addresses the fear around that. 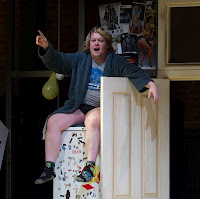 While the play made me think about these issues, it was also incredibly moving in a way I had not anticipated. The writing so accurately depicted these experiences of love and grief, but in a way which surprised rather than following a generic format or indulging in cliches. Chloe Lamford's set design was also pretty incredible with a realistic student flat which gets even more trashed over the night. When black bags are brought in and out of the flat and even chucked about and beaten at one point the energy from the cast was electric and the image, despite it being one of rubbish, was beautiful. The characters were so well formed and you really had empathy for every one of them, in this sad and desperate situation masked by their wild partying. This was a beautiful and moving piece of new writing, and actually one of the best plays I've seen in years. If you get a chance to see it - do. Simple as that.